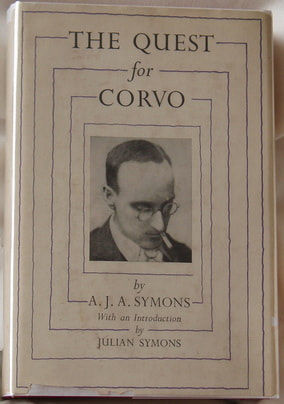 The Quest for Corvo

The Quest for Corvo

A remarkable aesthete and connoisseur, Symons was 33 when he became obsessed with the self-styled Baron Corvo and created this account of his quest to discover the then almost forgotten author of 'Hadrian VII'.

Both men constructed a tangled self-image and life-style, "noted for outbursts of elaborate expenditure alternating with extreme aestheticism", but Symons, who was dead at 41, has written one of the great literary detective works of all time, now a rare book in itself.

Jacket has some dirt and edge chipping, particularly to top of spine.